I was with a group of friends who had gathered to watch a sporting event on TV and those harsh words got my attention even though they weren’t directed at anyone in the room. My friend’s wife quickly admonished him: Why would you say that about someone?

With a sheepish grin, my friend clarified. He explained that he didn’t really want this athlete to lose, but that he wanted to see how he would handle himself if he did lose. You see, this athlete had a winning record and that night he was facing a strong opponent; he would be challenged. If he won, it wasn’t going to be an easy victory, and the last time he had stiff competition, he cracked under the pressure. His team lost the game and then this athlete threw a fit.

I knew exactly what my friend was evaluating. What was this athlete’s level of mental toughness? How would he handle the pressure? And if he lost, how would he respond to the outcome? Did he learn anything from his last loss?

Athletic performances sometimes provide great examples of what mental toughness looks like. Yes, there are examples of gracious winners, but more often than not, it’s easier to spot examples of sore losers; people with low mental toughness. These people blame their loss on a referee’s lame call, or the playing conditions, or a coach’s bad decision at a pivotal moment in the game. How often have you witnessed a player throwing his or her gear (bats, helmets, gloves, balls, etc.) when things don’t go their way? Videos of epic meltdowns on YouTube could provide hours of entertainment.

In the business world, a lack of mental toughness is often demonstrated by temper tantrums too: raised voices, slammed doors, quick tears, and repeated threats to quit. In the business world, poor losers blame others for losing a contract that was their responsibility to keep and create unnecessary drama over mundane events. They are also less willing to engage in tough conversations and address poor performance. Supervisors in this group often place a high value on being liked rather than true leadership.

And just to be clear, emotions aren’t the enemy here. Anger, in and of itself, isn’t good or bad – it’s how it’s channeled that’s the issue. Passion can be used to add energy to relationships and convey meaning. It’s the lack of predictability around emotions that tend to cause others to disengage and distrust.

In the book Mindset, author Carol Dweck highlights the reason why how we think about performance and how we handle difficult decisions is so important. Individuals with a growth mindset understand that being challenged is a way to learn and improve. An individual with a growth mindset (think strong mental toughness) takes responsibility for the process of improving themselves and their team. Opposite of a growth mindset is a fixed mindset (think lack of mental toughness). Individuals in this group blame elements outside of their control when things don’t go their way but take full responsibility for winning when they do.

Back to the athlete. Unfortunately, he lost the match. But guess what? No fits, no blame. He graciously congratulated his opponent, held his head high the entire time, and displayed a lot of mental toughness. I hated to see him lose, but I also appreciated his example. 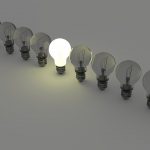