I participated in the 43rd annual Marine Corps Marathon held in Washington, DC, in late October. Aside from the incredibly meaningful experience, I found myself in a unique situation to learn additional leadership lessons.

At an early water stop a young Marine screamed at the runners, “The war is in you today!” Perhaps he’d been “motivated” in a similar fashion by his drill instructor during Marine Corps Recruit Training (aka, boot camp), as he knew exactly the tone to use to get our attention. He was intense! But that day, he said it with a great big smile on his face. And we were all voluntary participants, so it was the perfect sentiment to prepare us for what was to come.

I’m not comparing the mental effort of running a marathon to what a real war is all about. But the idea of a daily internal/mental applies equally to running and leadership.

Whether you are running a marathon or leading a team, you are guaranteed to confront at least three mental battles.

You will want to quit. When you’re running a marathon or when you’re leading people, inevitably you will ask yourself the question: Why am I doing this anyway?

Running a marathon is tough, and at some point during the 26.2 miles, you’ll fantasize about all of the other things you could be doing.

In the business world, there are days (likely a lot of them) that you’ll realize how much easier it would be to have a role as an individual contributor instead of a leader. No doubt about it.

Stick with it; it’s worth it — both running and leading!

Another guarantee? People will drive you crazy. In a marathon, it’s the people who get in my way; the ones who start and stop without warning, the runners taking pictures during the race (wait, that was me!), or the non-runners who dart across the course. In business, it’s the team members who aren’t a good fit for the organization, the disruptive and rude colleagues, or the customers with changing requirements and schedules.

Offer grace; they are worth it, and your patience and guidance make a positive impact.

On this course, there were at least two places that had an out and back segment, meaning those of us that were running out in one direction were literally inches away from the runners coming back in the other direction. It would have been sooo easy to discreetly flip directions and cut a significant amount of distance off. I understand that ‘cheating’ may not be a daily temptation for you, but weighing the short-term versus the long-term benefits for you, your team and your organization is certainly probable.

A great example? A perceived time crunch tempts us to seek a quick fix rather than look for the root cause of a problem. Or it feels easier to solve a problem for a team member rather than investing the time in working through the issue with them.

Again, it’s worth it. Finishing the entire race and investing the time in your team.

What are your daily battles as a leader?

Special shout out to all the active and retired military personnel.

Thank you for your service! 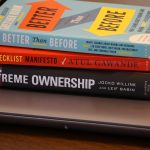 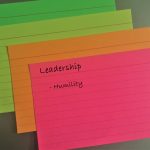